In astrology, Saturn is considered to be one of the most important planets as it stays in one position for a long time. Also, Saturn’s auspicious and inauspicious effects have a great impact on life.

Between April 2022 and January 2023, they have changed their position several times. In April 2022, Saturn transits the sign. After this, Saturn went retrograde in July 2022 and is now going retrograde on 23 October 2022.

Saturn’s transit will be on January 17, 2023 according to the Panchang. Saturn will travel in Aquarius till April 2025. 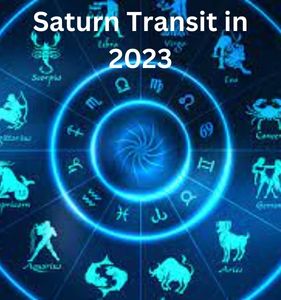 Ashtama Shani will start ruling over the people of Cancer zodiac who are saved by Kandaka Shani. Problems will increase between husband and wife. It is better to sacrifice each other. Cooperation needs attention. There will be unnecessary conversation between them. One should be careful while talking to the spouse.

Due to the effect of Saturn transit in 2023 on Scorpio, pay attention to health. Be careful while driving. Awareness is essential when buying a vehicle. Every problem has a solution. In the seven and a half years of Shani you have endured the trials given by Lord Shani, can’t you avoid it? Have faith in God, he will surely help you.

Usually creates some influence in family life when lord Shani is situated in the second house of the zodiac. For Capricorns Janam Shani ends and Paad Shani begins. Care should be taken in spoken words. Voting for some would be a problem. This will put you in trouble with money.

On the other hand, being the foot of Saturn at seven and a half, it reduces stress and fear and gives peace of mind.

The placement of Lord Shani in the form of Janma Shani usually has a minor effect on Aquarius. Saturn posited in Rashi Janma Shani will cause health problems.

Aquarius sign people need to pay attention to their physical health. Caution is necessary while traveling in vehicles.

Saturn starts at seven and a half when Saturn is in Pisces 12th. Gives unnecessary rushes.

There will be futile agitation. The year 2023 begins with the seventh for Pisces. Saturn begins seven and a half years after 30 years for Pisces.

Lord Saturn will give unnecessary haste. Change quickly. You will go on spiritual journeys. By giving alms to the poor and needy, you can escape from harm. Giving alms to someone is good.

Unexpected money flow, Saturn who is ruling Aquarius, is special for the people of Aries, sitting in the 11th house. A lot of money will come.

He will make a big profit in his business. Start a business. Get a new job with good pay. You will become extremely rich.

Shani Dev is going to give wonderful results for the people of Taurus. Economic sanctions will be lifted. Do not behave arrogantly during the transit of Saturn.

The sudden jackpot will give a sigh of relief to Sagittarius when Saturn moves out at 7.30 pm. An unexpected jackpot hit.

The financial crisis will be over. Suddenly there will also be an inflow of money. For the people of Libra zodiac, Arthashtama Shani will go away and sit in the former virtuous place, due to which you will build a new home for business development.