April 20, 2023 is the First Solar Eclipse and the name is Total solar eclipse which is visible in some of the countries in the world ie Australia, Antarctica and Southeast Asia. Solar Eclipse in 2023

What is Total Solar Eclipse?

A total solar eclipse will happen when the Moon passes between the solar system head Sun and the planet Earth. This will completely block the face of the Sun.

In the time period the sky will darken. If you are determined to view the Total solar eclipse safety is very important. You should wear the eye protection glasses suggested by the astronomers.

May 5,2023 is the First Lunar Eclipse and the name is Penumbral Lunar Eclipse which is visible in countries like Asia, Africa, Australia. 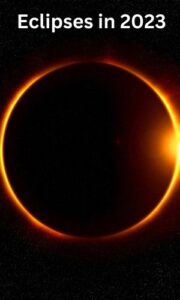 What is the Penumbral Lunar Eclipse? – Eclipses in 2023

A penumbral lunar eclipse happens when the Moon moves through the outer part of the Earth’s Shadow called penumbra. This will occur when the Sun, Earth and the Moon are not perfectly aligned.

There are two types of conditions that will occur in the period of penumbral lunar eclipse.

1. The Moon is in the Full Moon Phase.

2. The Sun, Moon and the Earth are not aligned perfectly in this kind of partial eclipse.

The second Solar eclipse in the year 2023 is the Annular solar eclipse which will be visible in the countries of South, Central and North America.

This is the second solar eclipse in the year followed by the first lunar eclipse of the year 2023.

What is the Annular Solar Eclipse?

An annular solar eclipse will occur when the moon will cover the sun’s center part and the outer part of the sun is visible. This will look like the “ring of fire” or annular (means ring-shaped) around the sub planet of the Earth’s Moon.

Annular comes from the Latin word “Annulus” which means ring.

What is a Partial Lunar Eclipse?

Short Note about Eclipses in 2023

There are Four Eclipse events that will happen in the year 2023. Two of them are Solar Eclipse and the other two are Lunar Eclipse. They will come one after another on the specific date of the year 2023. This will be correctly calculated every year in NASA.

Thanks for Reading “How Many Eclipses in 2023”.